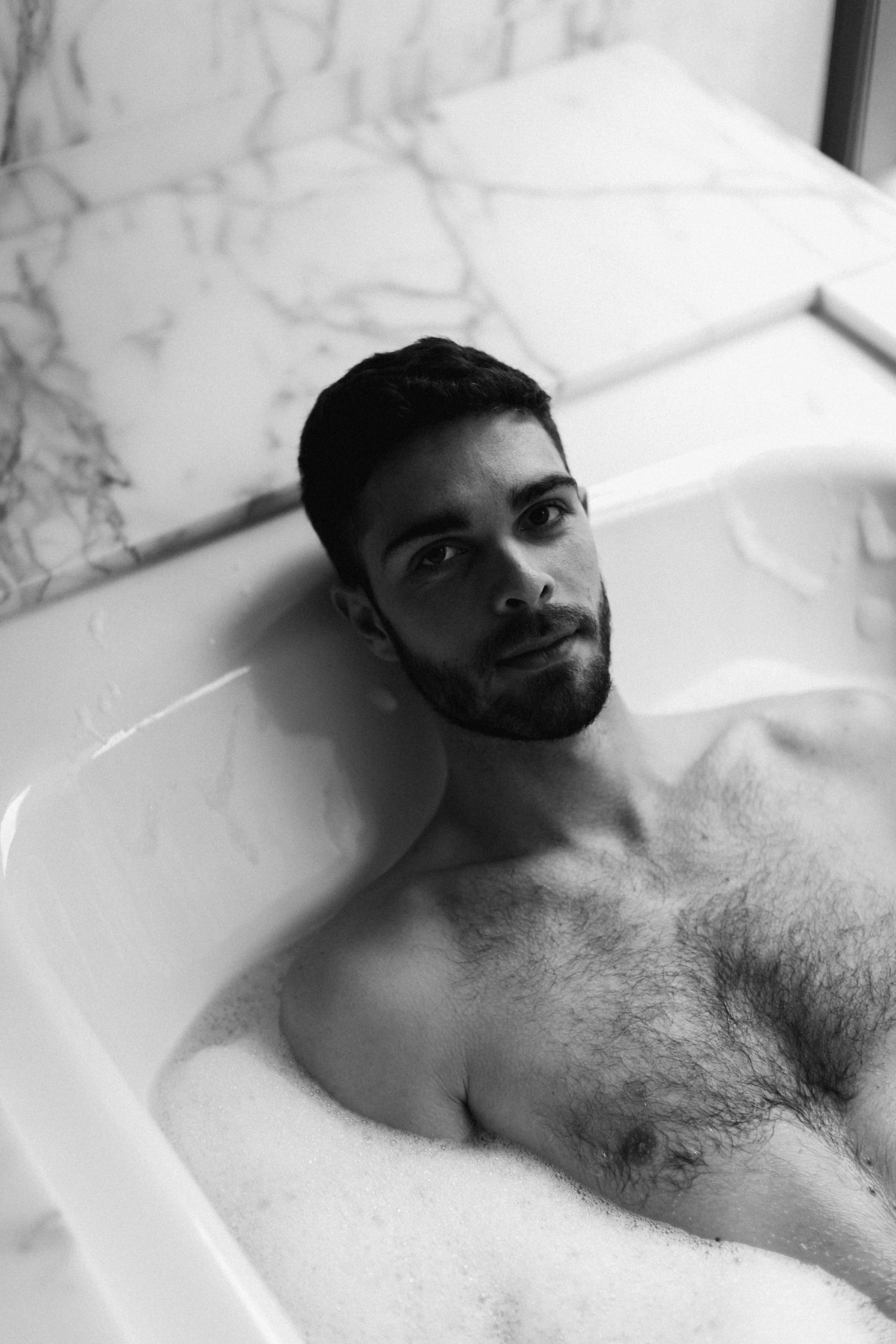 The number of mental health issues and pain that can be avoided from saying I’m allowed to cry even though I have a penis...

I enjoy stretching as many gender stereotypes as possible and not only talking about modern masculinity and gender politics but displaying myself openly as a guy who takes baths. All the projects that I’ve put out in the last couple of years are fucking with the perception of men, and what pisses people off the most is when I upload videos of myself sobbing. I’ve had literal death threats from men saying I’m “pussy-fying” men because I’m saying it’s OK to feel feelings. When those things happen, I think: cool, I’m going to do way more of this because obviously that’s hitting a button.

Where do you think men fit into this “future is female” narrative?

I think of it as pretty synonymous with the ’70s when the third wave of feminism was really kicking into high gear. The first men’s movement in that decade was founded on men supporting women. Then the next iteration of that was men supporting men. Humans are connected so inevitably if a guy feels more supported, and seen and loved and held, he’ll have more mental and emotional bandwidth for all people in his life. And many of those people are females. As long as people are feeling their feelings, doing their work, and being in community, everyone wins.

What does being a man mean to you as opposed to what the world tells you what a man is?

I see a lot of people becoming themselves over their lifetime. You’re born with your gender, and your culture, and your society and the things that you were handed, and ultimately, I see the point of becoming your own person as building that culture. What do I actually want? That’s been my process to becoming what I believe a man is.

So what’s your version of a man?

My version of a man is someone who prioritizes aliveness about all else. Whatever is the truest for me, I just guard that fiercely and prioritize my individuality and community and sense of bliss above all else. That looks like allowing myself to not give a shit about watching sports, or being fine not drinking beer or alcohol at all, ever. Or, feeling all my feelings happily. And not saying that this 70% of the emotional spectrum is fine but this 30% is bad because that’s what media tells me. Instead, allowing sadness and grief and anger and seeing the entire emotional spectrum as beautiful. If I had 30 seconds to do my last TEDtalk before I died, that would be my message. Regardless of gender, you’re allowed to feel all your feelings. Feel feelings!

The amount of mental health issues and pain that can be avoided from saying I’m allowed to cry even though I have a penis and I’m allowed to not do life on my own but let people be there for me, the ripple effect of that for men and women worldwide is incalculable.

What type of men or women have come into your life since standing in your truth like you are?

I’d say the most consistent things are people that are just concerned or obsessed with truth above all else. I see modern friendship as based on bitching and enabling. People meet up, get drunk in a bar, and talk shit about their lives. They talk about their parents and their jobs. They talk about the things they need but do nothing about it. Enabling is never calling each other on our shit, basking in our blind spots, and connecting on our wounds instead of our joy. People who are obsessed with truth, and are also hellbent on cracking away every piece of the armor or the mask they’ve used as their once necessary survival mechanisms, those people have come into my life. Full, alive people. 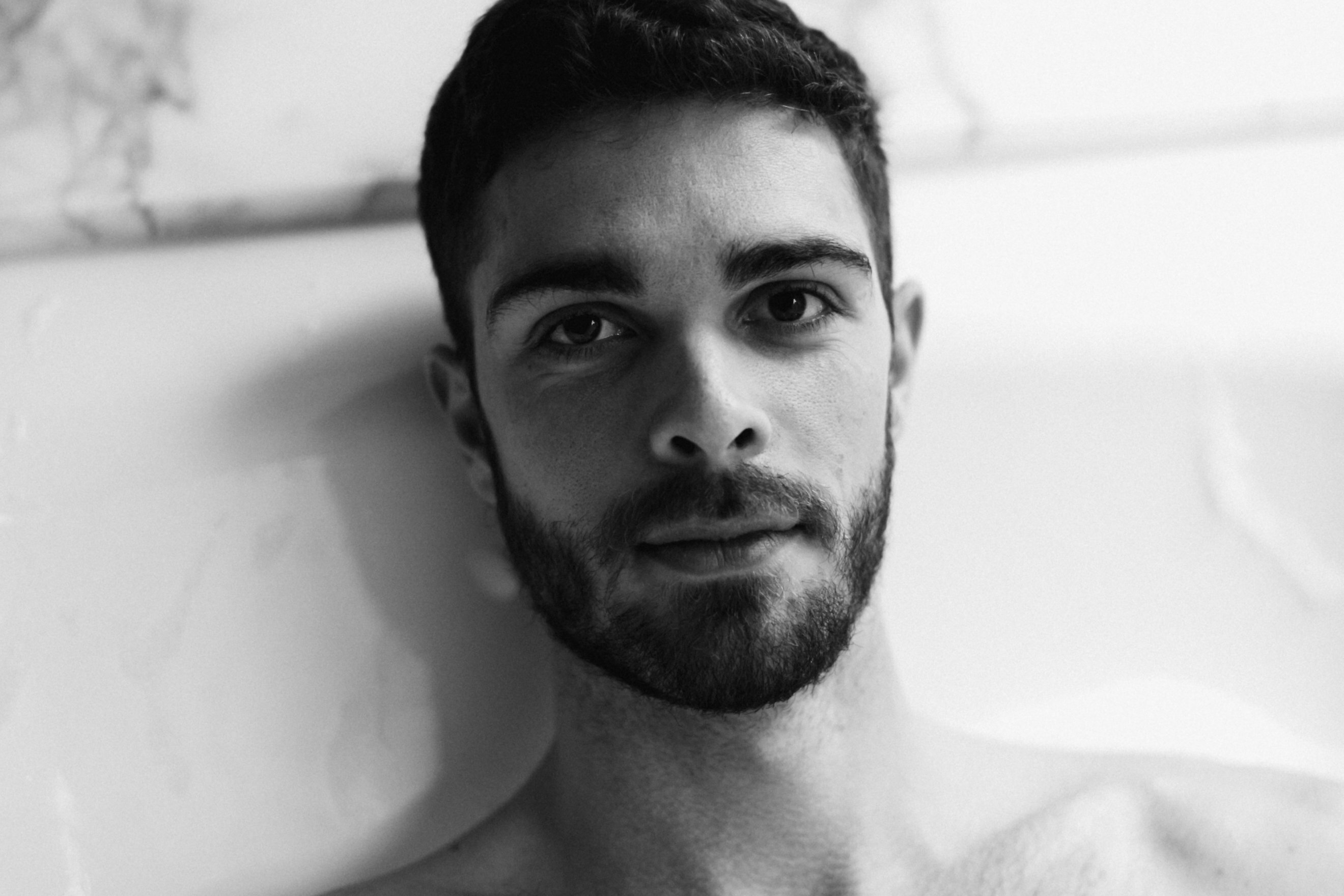 How do you have this conversation with other men?

There are two parts to that. I’m in a men's community of about 120 guys, and I run a weekly men's group where we sit in my living room every Monday for three hours. With those guys, no one needs to be convinced, like hey guys remember we respect women? It’s in there. It’s in the DNA of the gathering. But then because I have that community where the self-reflection bias is so strong, when I’m in my day-to-day, and I hear someone at a dinner party make an innocent sexist joke and I can feel their sideways anger towards women slipping out, I’m like OK, this is not only still existing but very default. How do I approach those people? With curiosity and patience. I don’t assume this is an intrinsically bad person. I get curious about their pain and what led them to that worldview. If they had an abusive or emotionally absent mother or their first few girlfriends cheated on them in some spectacular fashion, whatever they are sitting on, I try to find that seed of truth for them as quickly as possible and then engage that dialogue. The degree of willingness is up to them. I can’t do the work for them.

One of the biggest barriers to entry and one of the biggest reasons that people don’t empathize is the lack of awareness of what the average female life is like. I think being willing to patiently and persistently have these conversations is key. I’ve known women who have had these conversations with guys and when they receive any push back, which is understandably frustrating, they feel the disconnection. And it’s like, 'no, I’m not imagining these fucking decades of being looked at like a piece of meat.'

The average man really has little awareness of the reality of what women’s lives actually look like, so building a baseline of trust, understanding, and compassion is really essential.

The second part is that to the same degree that men don’t understand the issue with female safety, women don’t understand how sensitive men are to female disapproval. When men are trying to do their best, and they’re on the ally train but they feel like they’re still fucking up and they are being wrong or shamed in the attempt, it can knock a guy back 10 steps. As I mentioned, patience and persistence in explaining your unique worldview, which guys have close to no access to. If he can have these deeply involved conversations with his mom, sister, and girlfriend, the message is going to stick. It’s about letting them have their clumsy presence in trying to do their best. 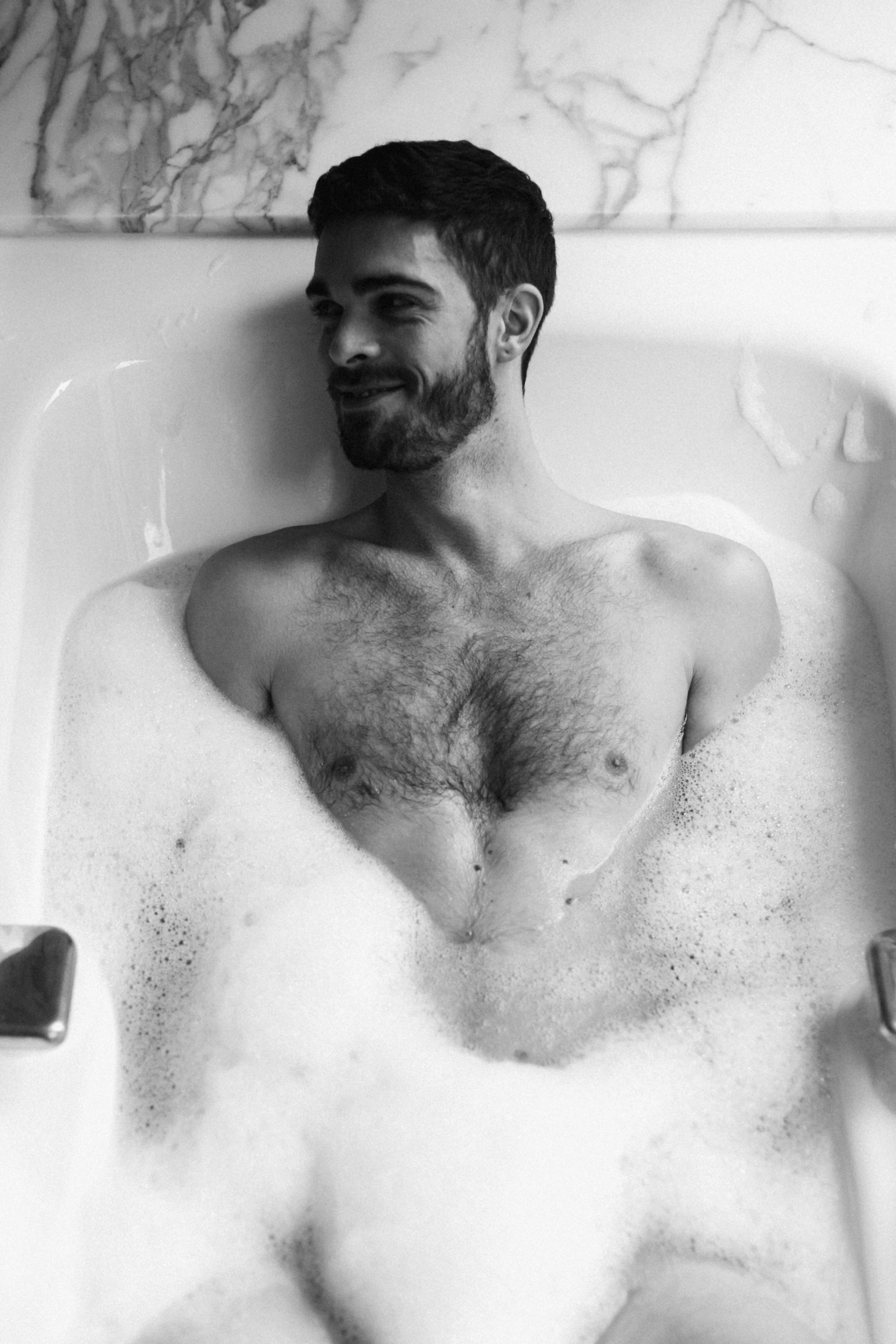 Enabling is never calling each other on our shit, basking in our blind spots, and connecting on our wounds instead of our joy. 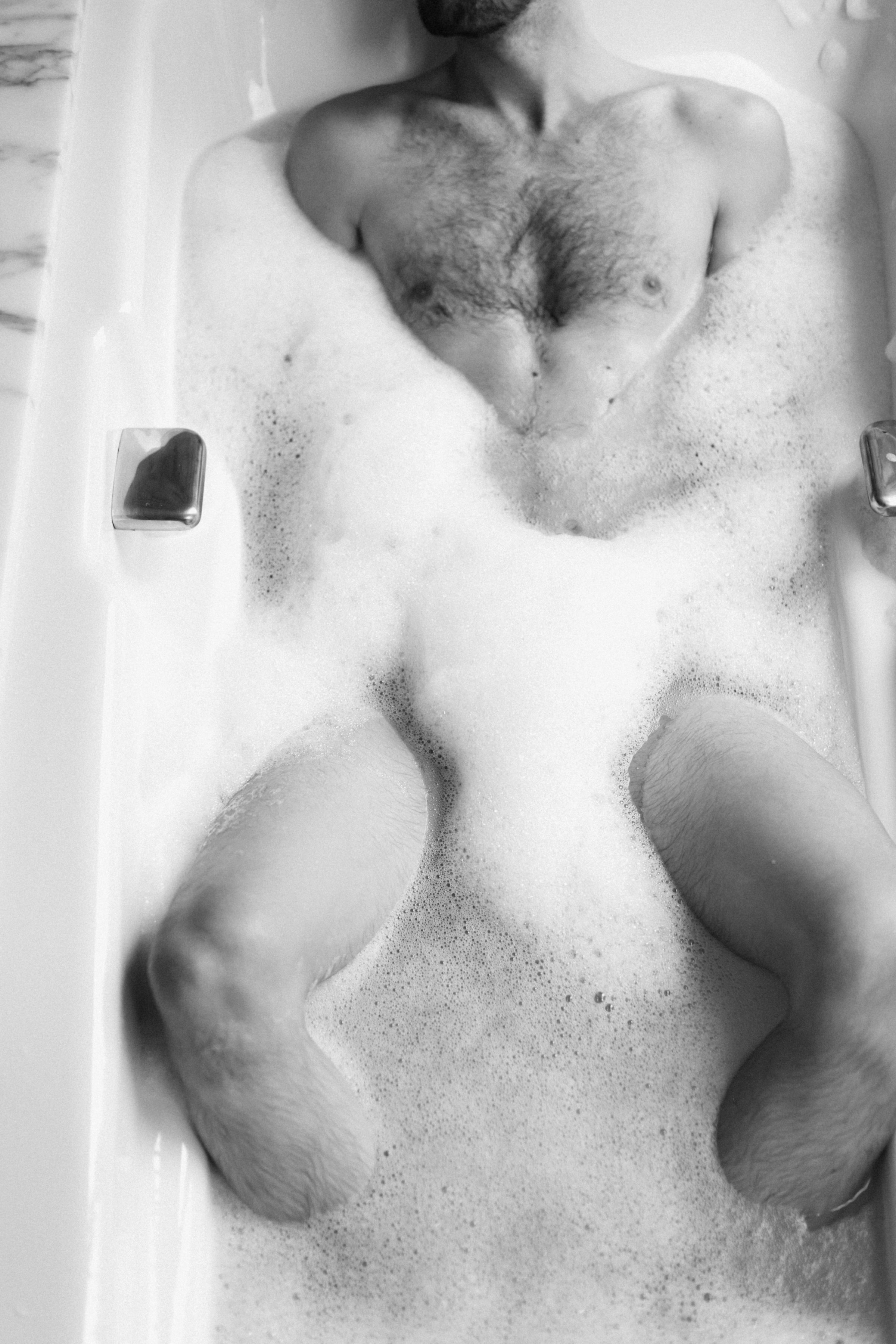 Be a present, loving, attentive father and partner, and in doing that, boys will model that behavior.

How do we raise boys into men who view women as equal?

I’m a strong believer in doing your individual work, and one of the best things that a man can do as a father is actively encouraging women in his life to be strong-willed by giving her space and freedom and encouragement and validation and never subtly trying to dim her light or keep her power down. Love her hard. Be a present, loving, attentive father and partner, and in doing that, boys will model that behavior. If you want to model how to treat women well, be a person who treats women well.

Past that, proactively teach boundaries and body consent. Regardless of gender, if your son or daughter is leaving a family dinner and doesn’t want to hug their aunt or uncle goodbye, not forcing them to, and going OK, your no is enough. That’s fine. That’s just a micro example. Be encouraging of who the child expresses they are, not who you think they should be, like be a doctor or a lawyer even though you’re clearly finger painting and want to be an artist. They don’t want to play football? Don’t force them into it.