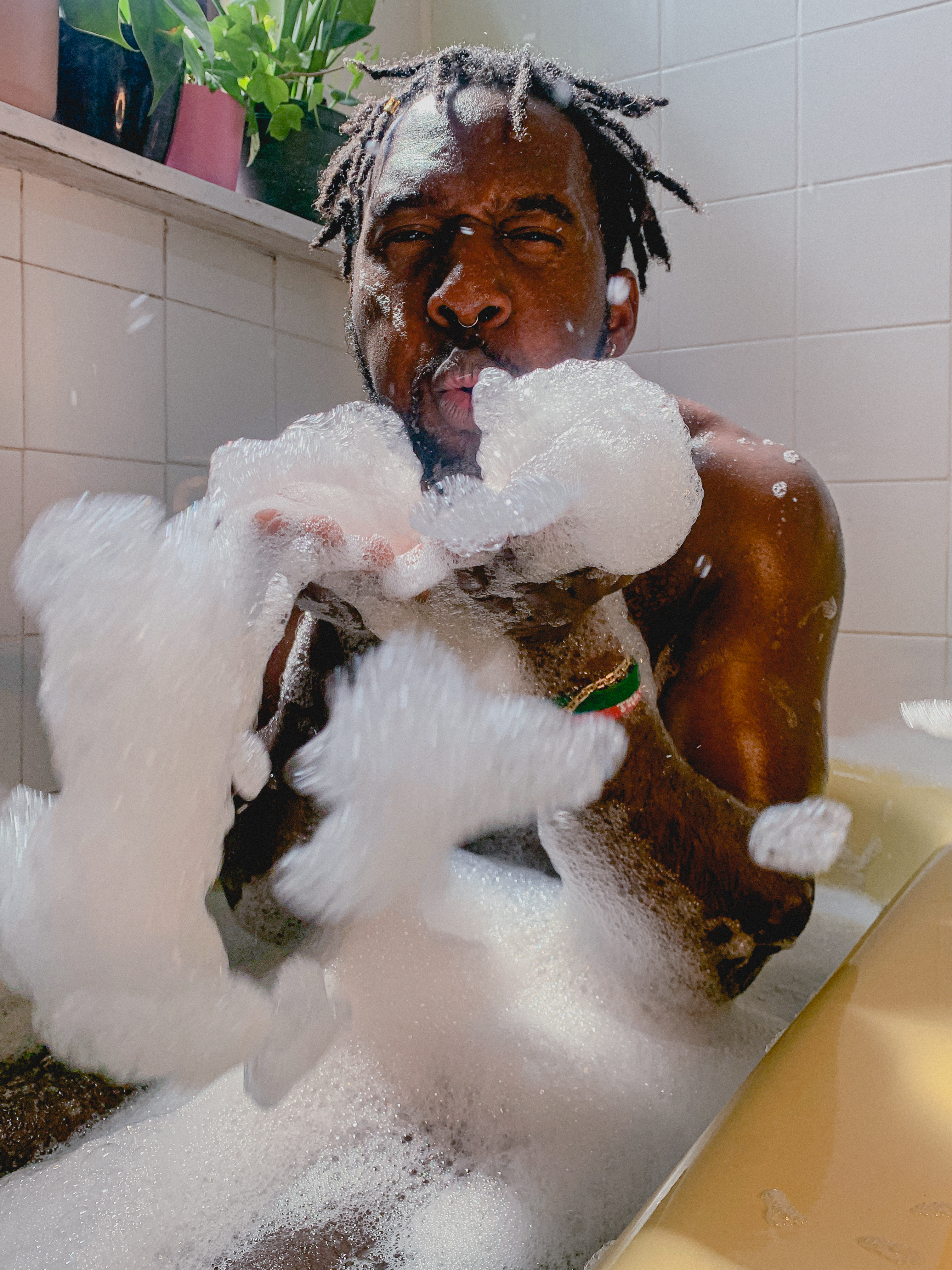 "We weren't raised to handle the conversations we need to be having."

I saw a safe space where men could talk about the traumas or the social constructs that are forced upon us and be able to have a vulnerable conversation about what's going on in society from a place of non-judgment and honesty.

In what ways have those social constructs been pushed on you?

Men seen as the monster, and that conversation in relation to women. Take a dark alley. There are safety concerns that women face that men don’t, for the most part. Women walking alone or whatever. It’s interesting because there is a dichotomy of terror. On one side, the safety at play for women is very real. It’s real trauma. But then men feel like a monster. You see images of men stealing purses… 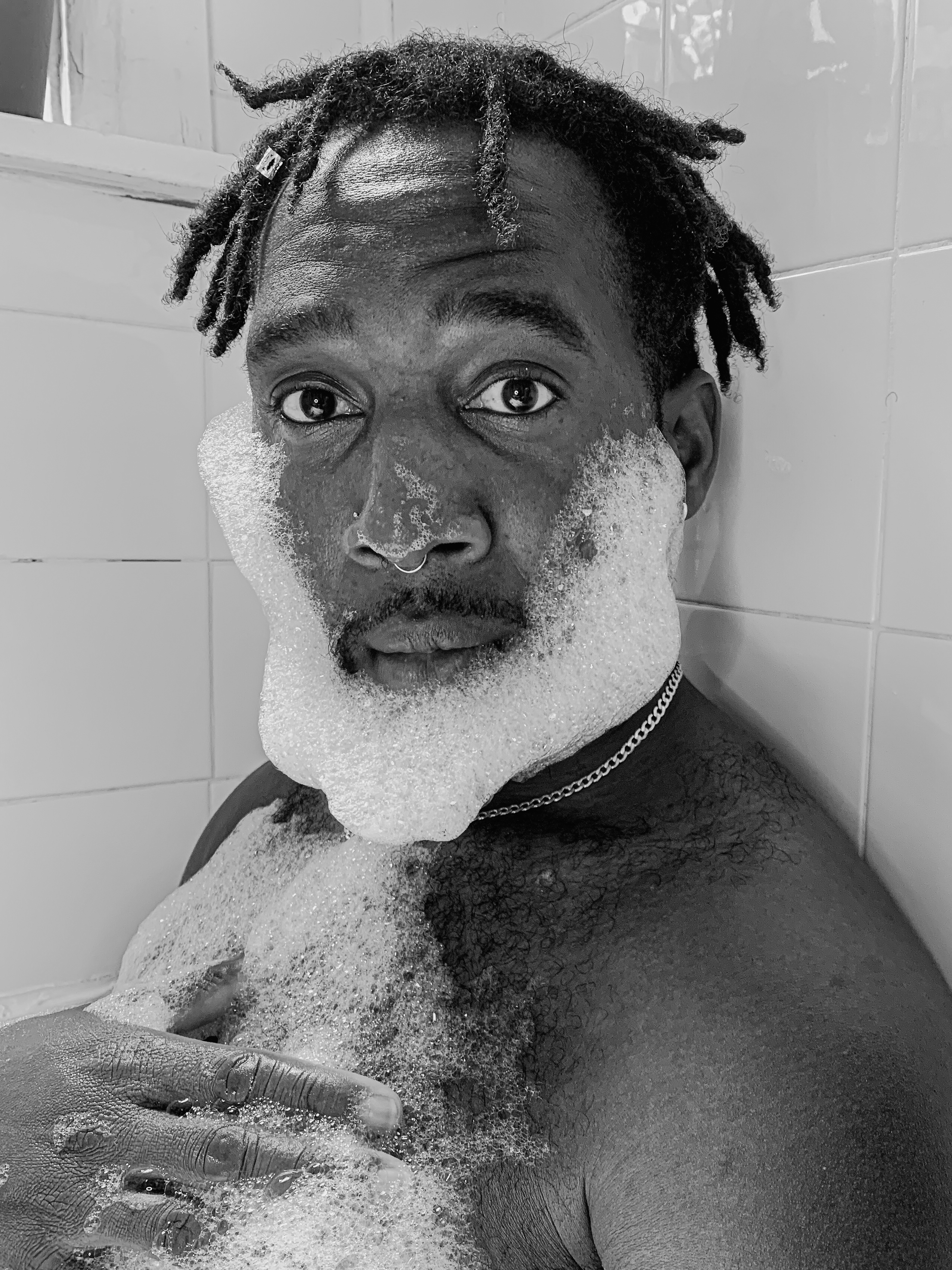 Referencing that certain behaviors are generally ascribed to men, such as the use of force? If women are told the world is an unsafe place because men occupy it, how do we shift the conversation so women feel safe without men feeling villainized?

We need to have more conversations about it. That conversation occurs at the home with parents. Telling your daughters the reality of the world but not in sweeping generalizations. And having conversations with sons to be aware of the fears and traumas that women live with.

Regardless of whether you’re a nice guy, if it’s dark and you’re walking behind a lady, walk across the street. It’s not because you're a monster, it's understanding that you aren't worried about being overtaken, but for women, that’s a real fear. Be mindful of that. You don’t have to communicate verbally to communicate an understanding of the situation.

I remember I was on the train and there was a lady sitting across from me and a gentleman standing up who was irate. He made his presence known. I caught something that was fascinating to me. The lady across from me knew where this man was every second without once making eye contact. I realized that she was super aware and knew what not to do to warrant an interaction. I asked my friends about it later and was overwhelmed by the response that it’s a lived reality for women to be hyper-aware like that. I ended up casually standing up between her and the guy. I tried to create a buffer of safety. 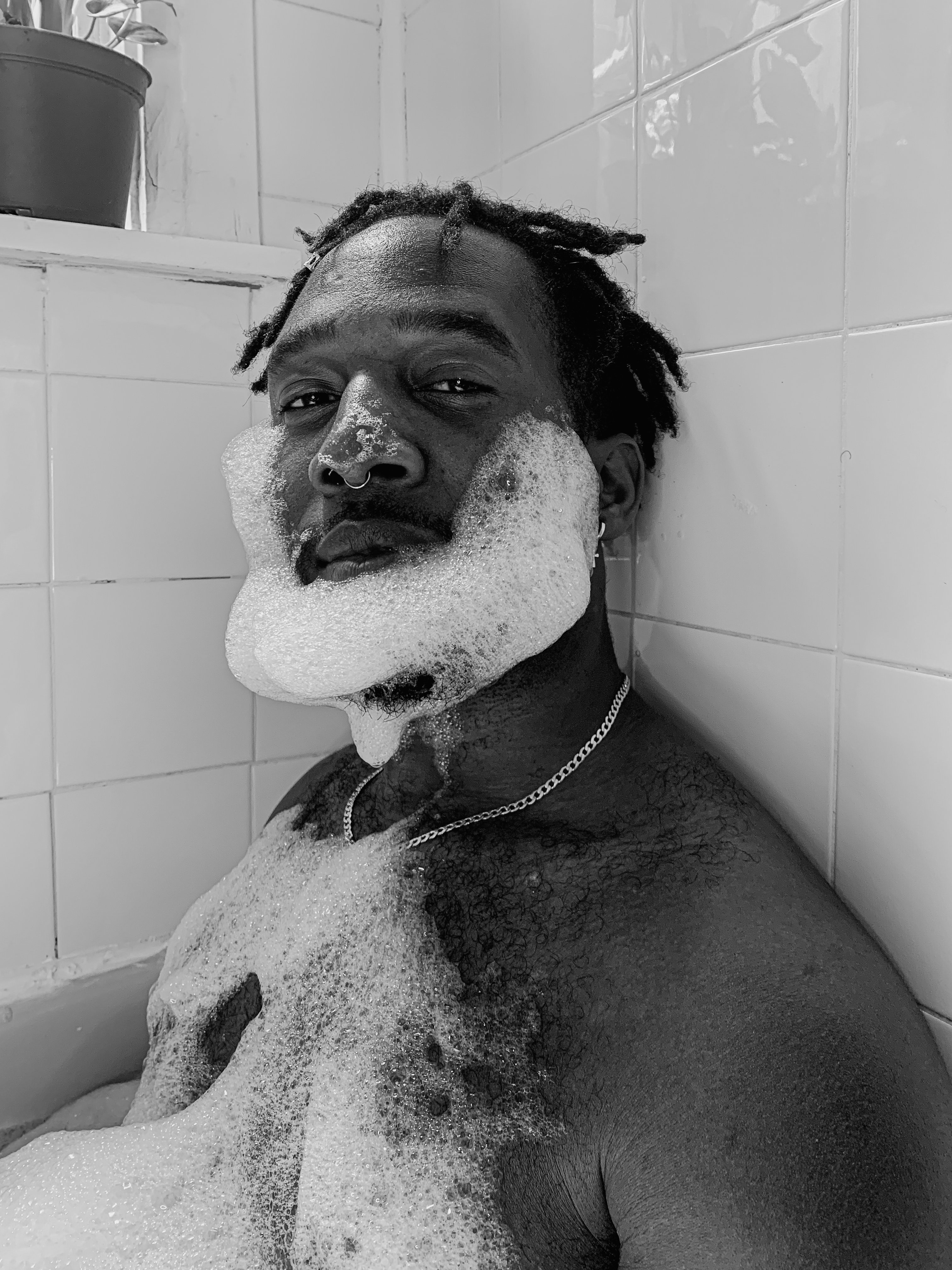 At the same time, we weren't raised to handle the conversations we need to be having. It often turns into a “you did this,” and that’s not where it should be going. We need to assess the problem honestly and make tangible solutions.

And sometimes you have to let people express their traumas. That’s the thing I have the hardest time with. I want to get to a solution. Maybe that's not where someone is at. Maybe they just need to vocalize something they haven't before. It doesn't matter if it’s leading to a conversation. It doesn't matter to them if it's a generalization. We have to let people speak. 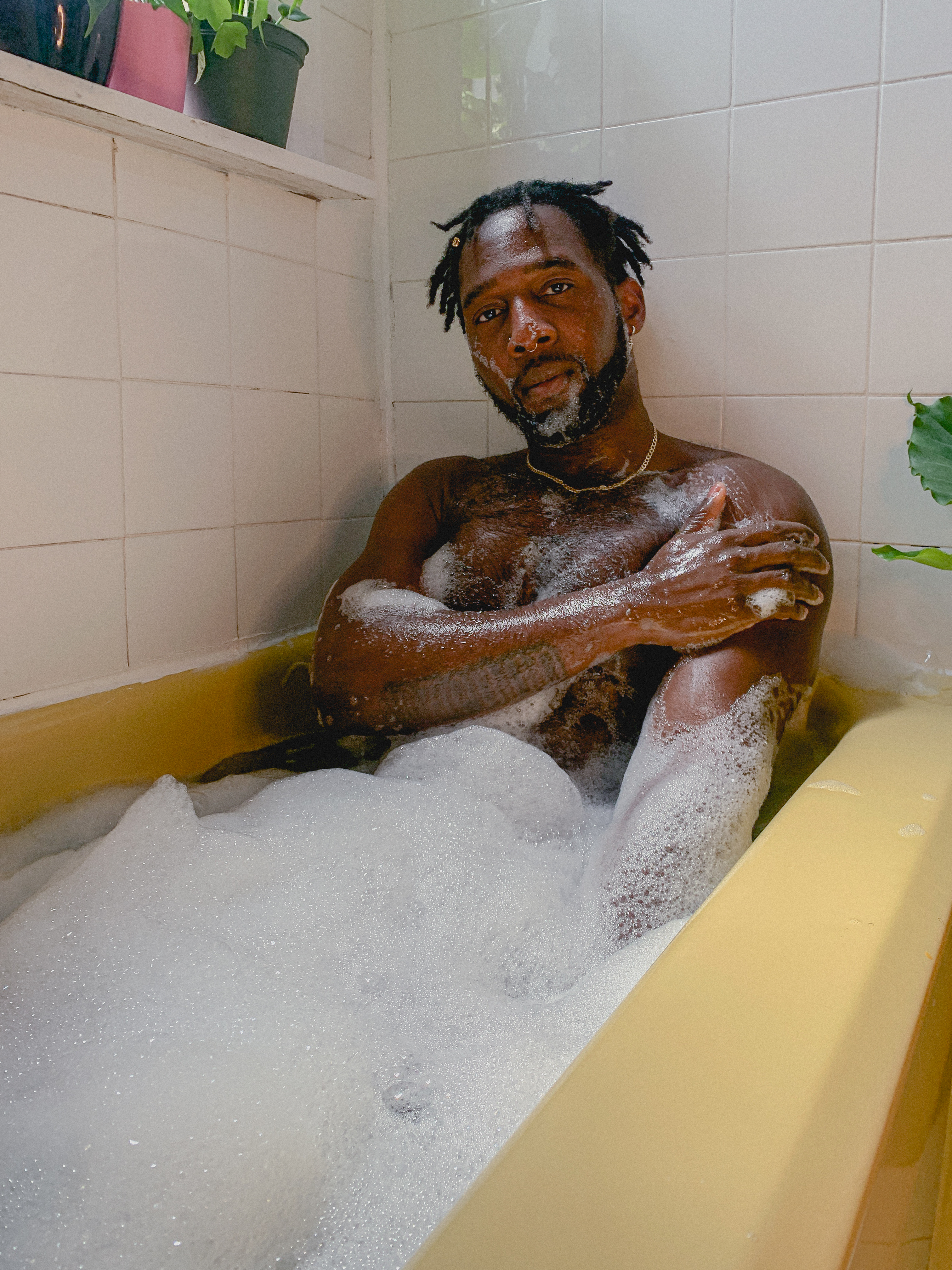 Do you have intimate male friendships?

I have two male friends. It's weird because the simplest thing to express intimacy is to tell them that I love them. You don’t usually hear that among men. 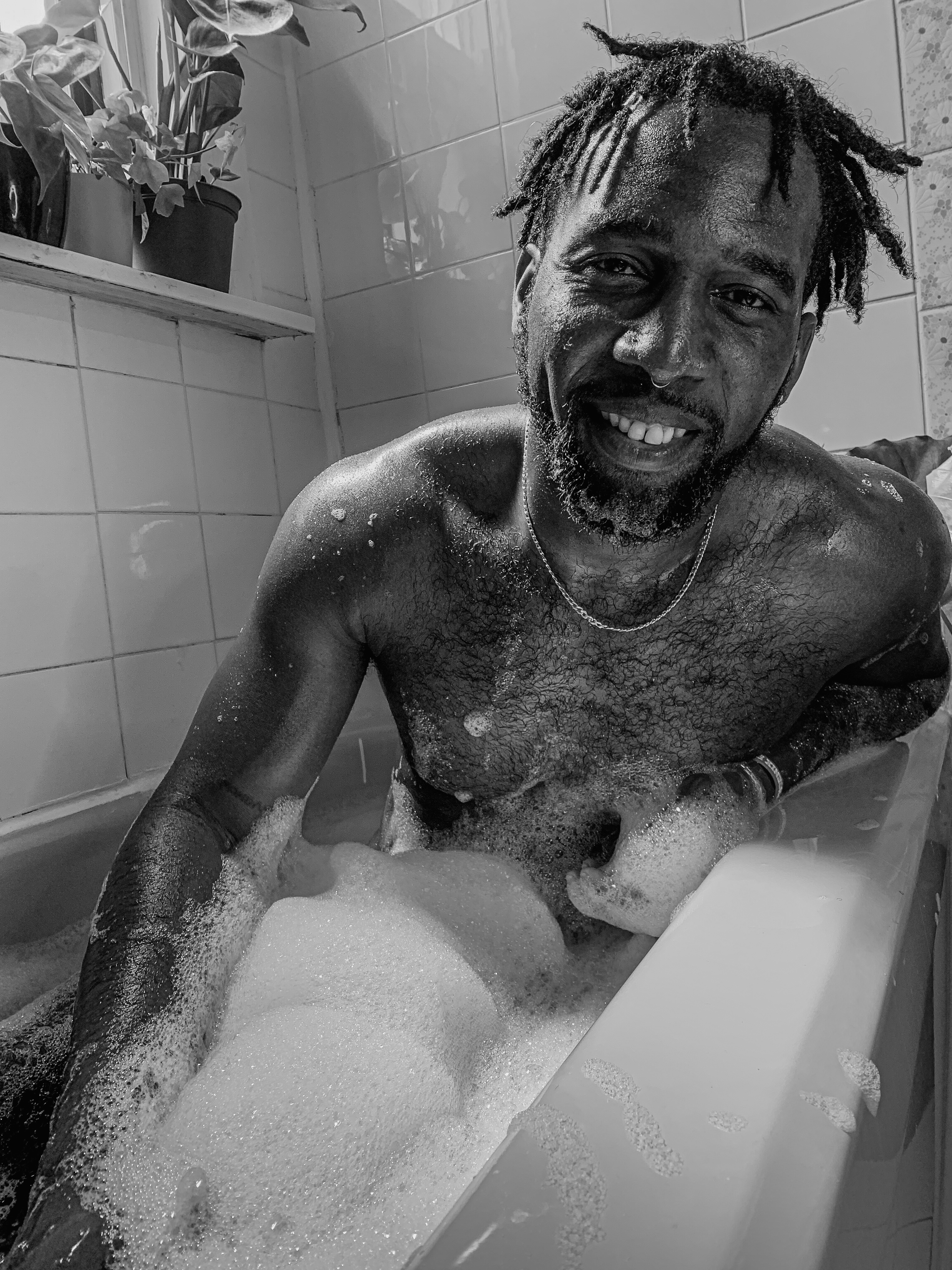 How did you get to that place with those two friends?

The first one was breakups. Just being there for your guy friend where you don't need to tell them what to do, the idea is just to offer your place when they can't sleep because everything reminds them of their ex; like, here's the key.

The relationships started with football. You learn a lot about the type of person you each are within that environment of 75 men. You see people in certain situations–in this instance, football–and you realize what resonates with you.

Men need to understand that men are their audience as well.

By you sharing something like a statistic about sexual assault, it's more consumable for men from the male perspective.

What do you mean by that?

If I share a post where I talk about sexual assault or catcalling, versus if a woman shares it. Okay, let me explain it this way: it’s not the people inside the jail who should talk about prison reform.

In this conversation, it’s men who need to be talking about sexual assault because it’s us who are contributing to it. I’m not saying men created society by themselves, but patriarchy is the misuse of power and the diabolical aftermath needs to be addressed by men for men. 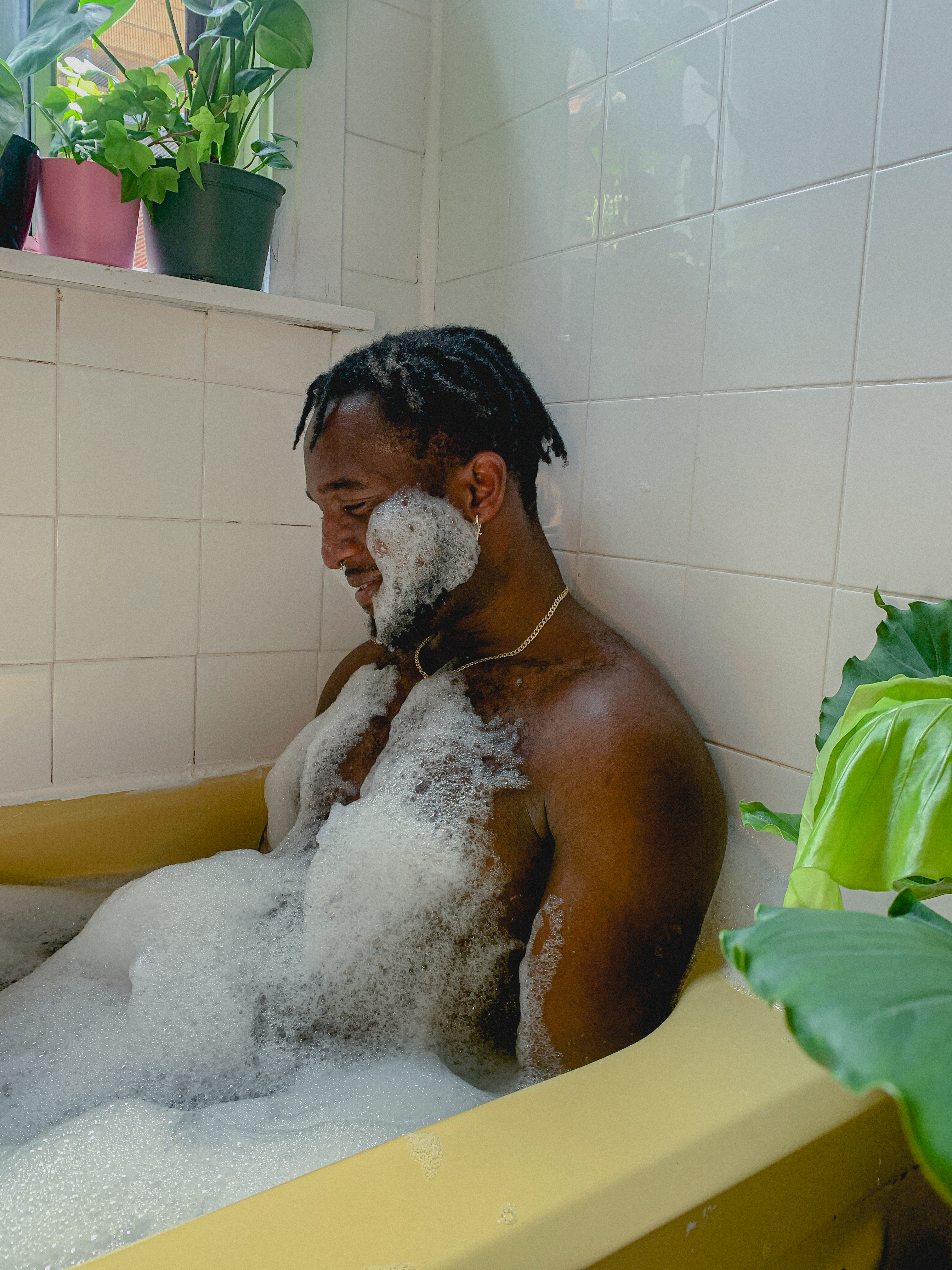 How can women support men in accessing deeper parts of themselves?

Men don’t know how to exist in an emotional realm, for the most part. If someone is getting emotionally charged in a conversation, you almost simplify what that means because you’re not familiar with that process and the depth of knowledge that can be accessed from there. Women are, for the most part, better at the emotional process.

I find myself purpose-driven in the sense of believing I’m a being who has been put on the earth to do something. I am physically strong, so I use that strength as a solution to many things. 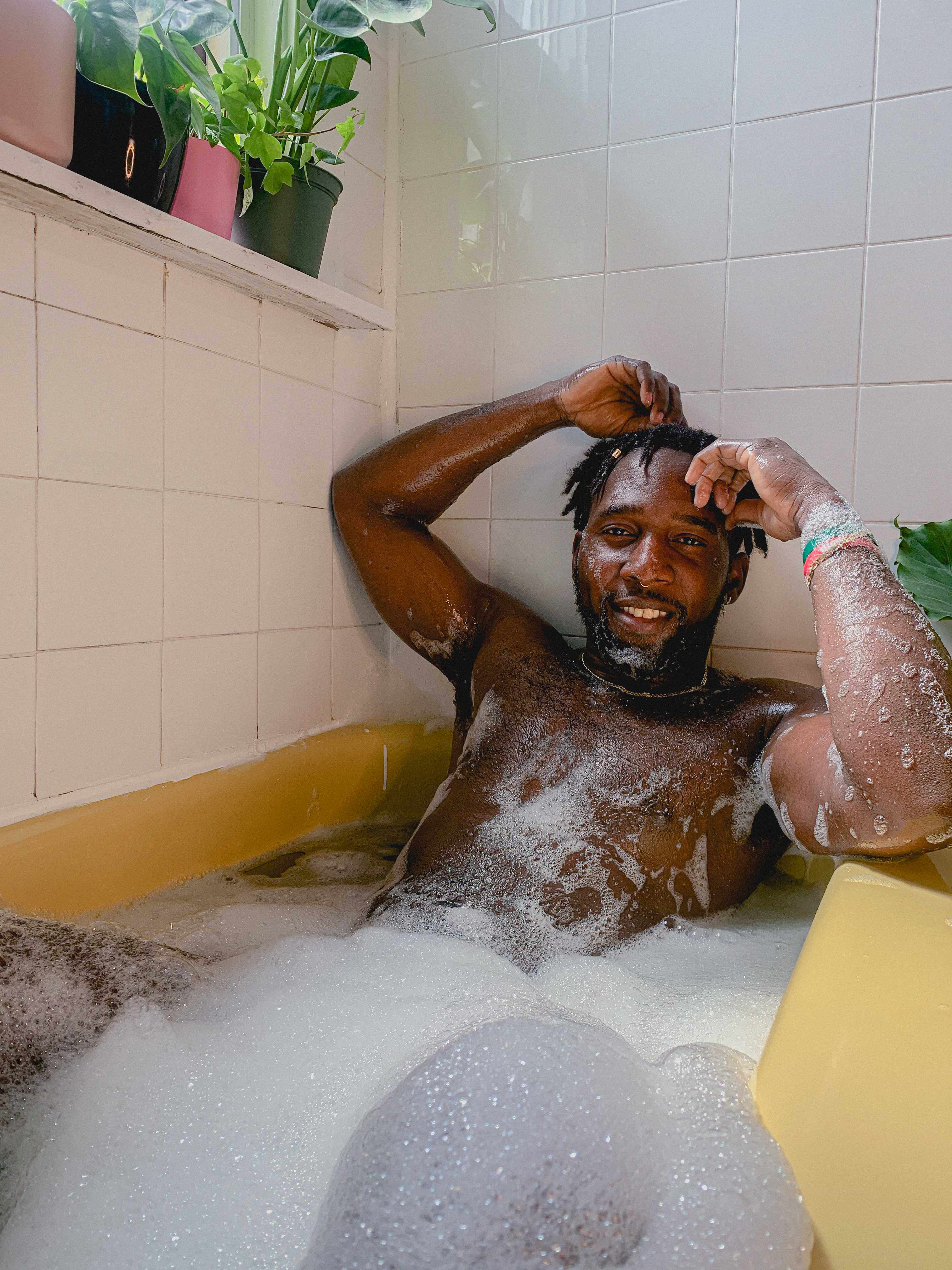 What in your life has had a profound impact on who you are?

My faith. The idea born from that is love for everyone. That’s been huge.

It’s weird because the same faith can create more than one type of person. Is religion the dividing conversation of civilization?

Why do I care about all people? Everyone experiences pain but not everyone knows how to exist in pain equally. 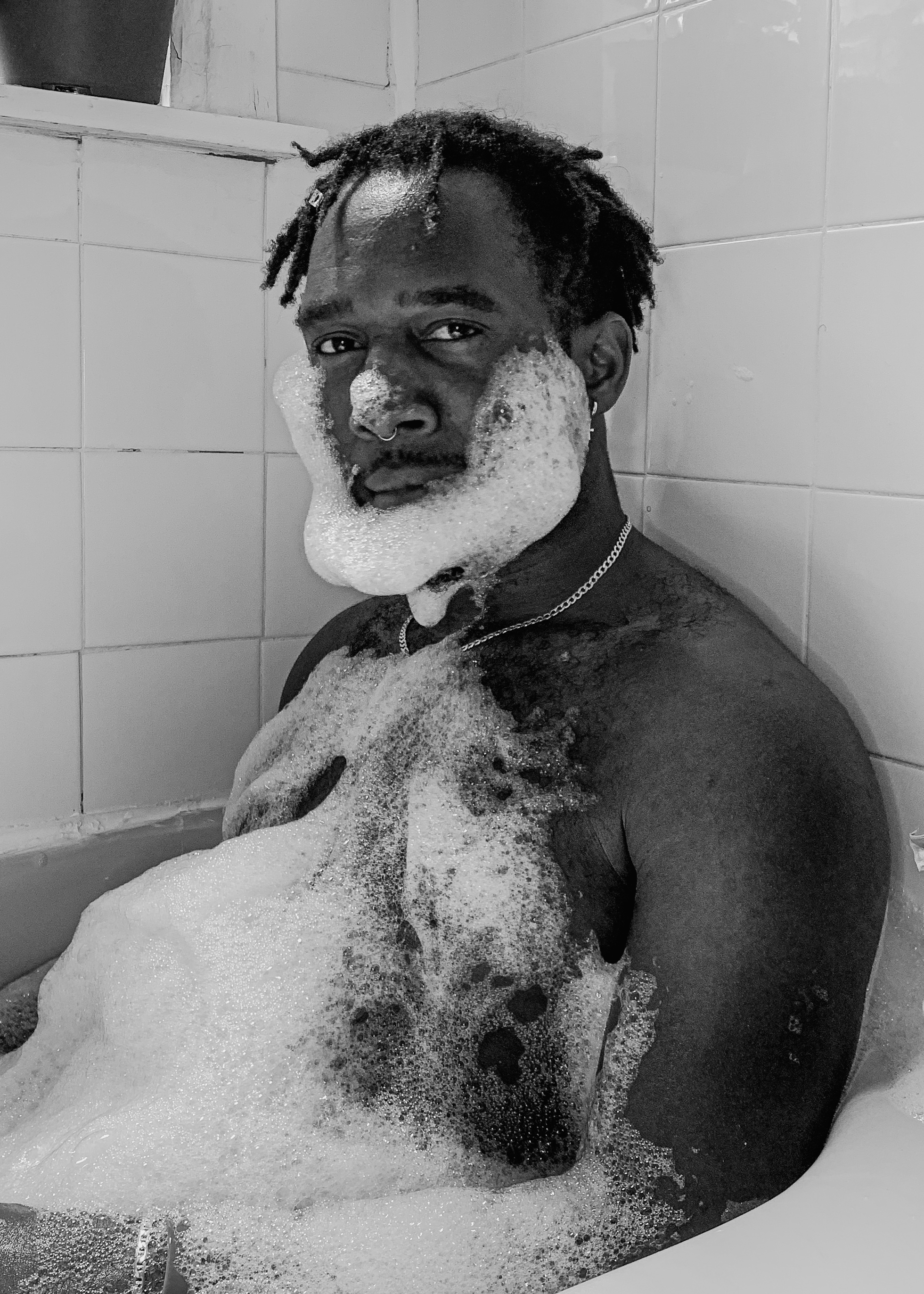 Have you had a moment in your life where you had to choose what kind of person you wanted to be within pain?

I found myself in a position where a woman asked whether a guy I knew was a good guy. It was misplaced jealousy. I was in a relationship at the time. I slandered his name. I told the truth.

Slander and the truth are different things though, so which was it?

You’re right. It still feels like slander because "if you don’t have anything good to say, say nothing at all."

I knew this man’s flaws. I realized that I never wanted to speak on someone else's name. If they have negative traits, it’s not for me to say. I should have told her it was up to her to get to know him. I didn’t need to say negative things about someone else. My mentality going forward from then was not to make judgments on people. 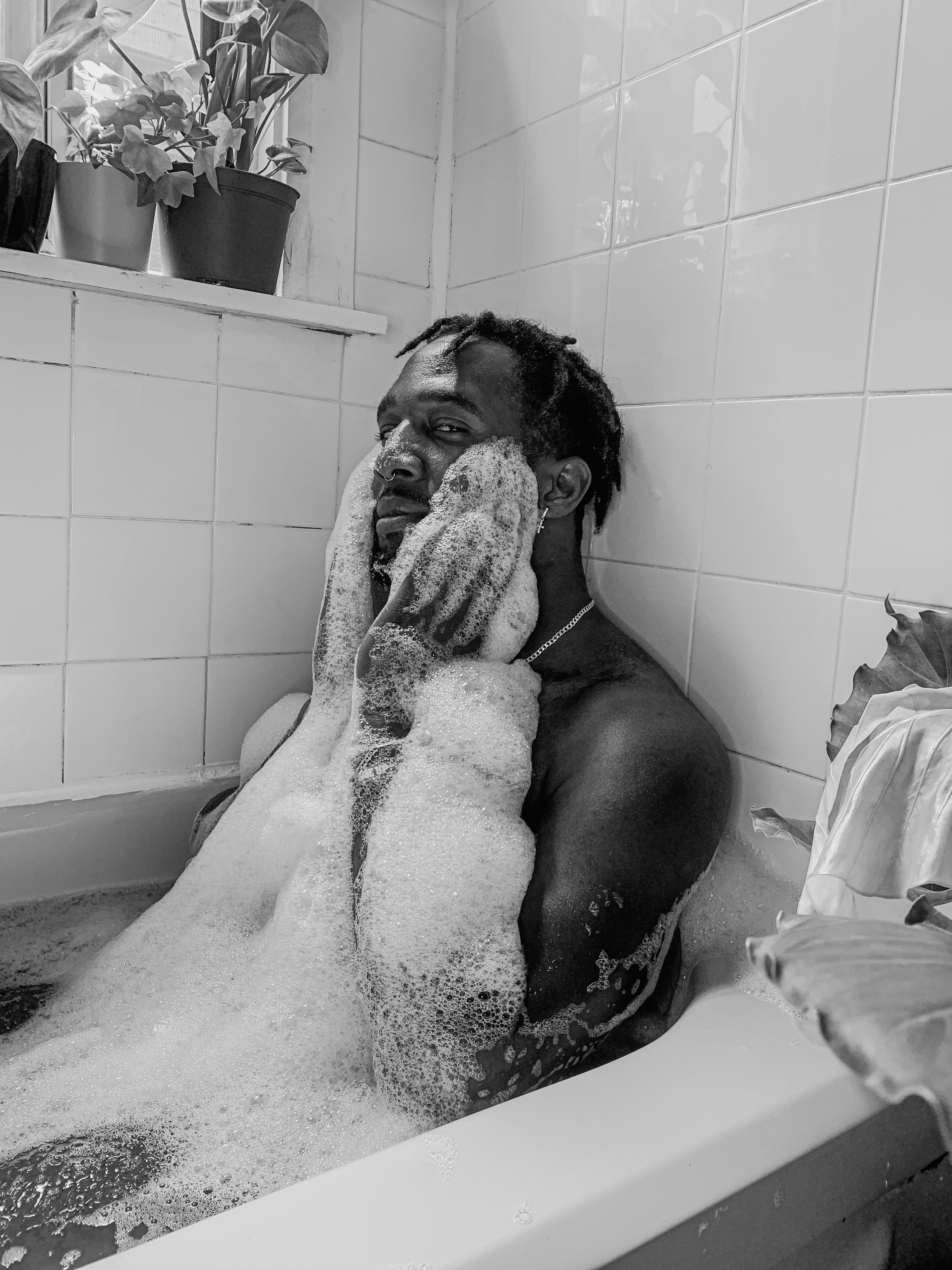 Do you uphold those values today?

Annoyingly so. If someone wants to have a conversation and they want to shit-talk someone, I can’t contribute to the conversation. Or I’ll try to show the other side of it when they just want me to agree with them.

When do you feel most powerful?

When I’m serving others.

Music, art, volunteering, doing things that don’t inherently serve me. They may benefit me but that’s not the rationale for doing it. I’m doing it because it feels right. That’s when I feel the most like me. That’s gotten me into some trouble because I expect people to treat me how I treat them, and they might not know how to be selfless.

The reason you’re still breathing is because you’ve been given an opportunity to evolve, that’s my mantra. 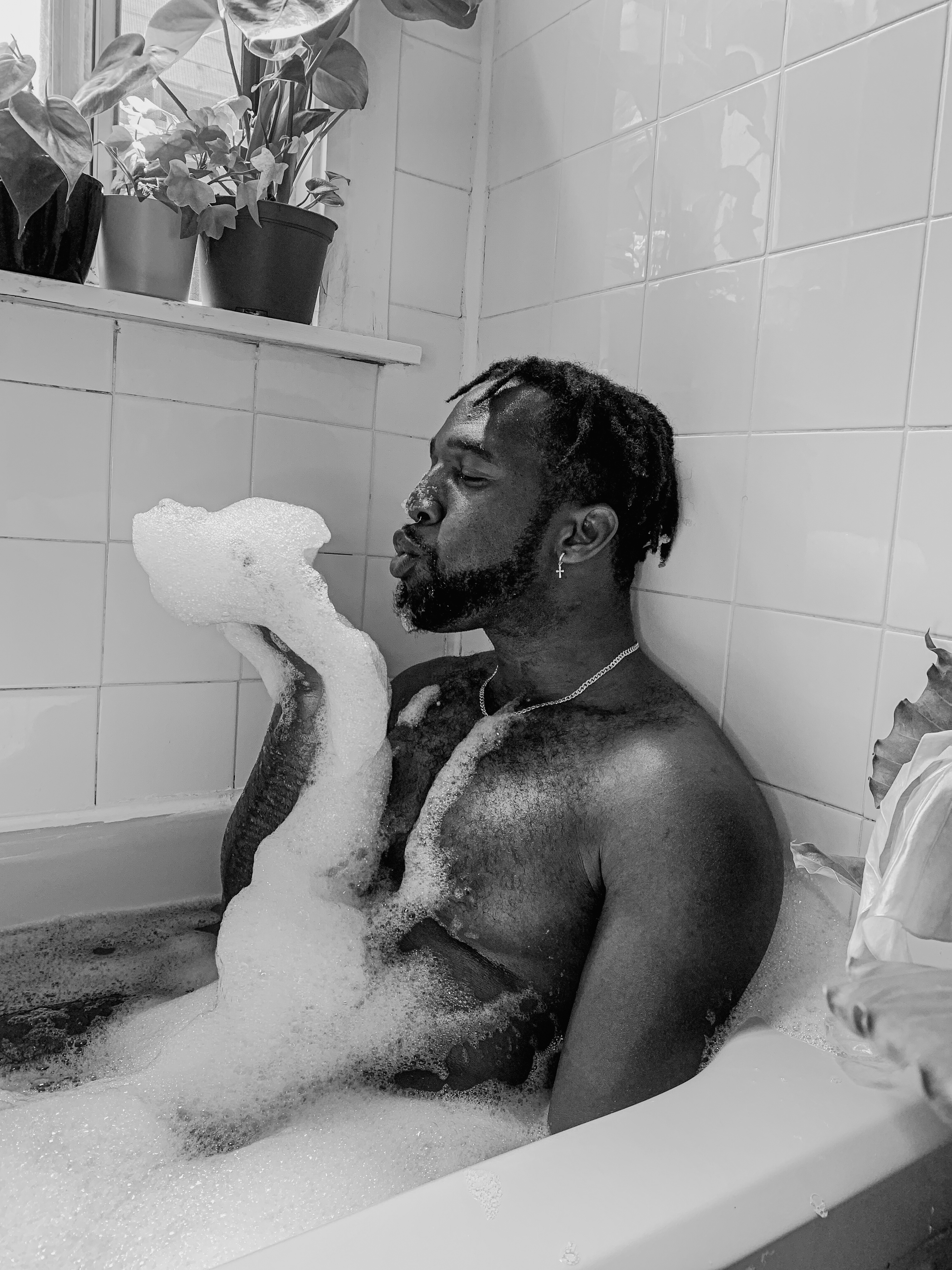 Not getting stuck in the muck of mistakes?

Not getting stuck by learning from them. The consequences increase when you don’t learn. One of the first lessons that hit me was not playing with a woman's heart. I was a semi-pro athlete and had my pick of women, in a sense. Truly learning not to play with a woman’s heart evaded me to until I was forced to look at my behavior.

When did hurting another hurt you enough to change, because it sounds like that’s what happened?

I was sitting on the top bunk of a prison cell and the person under me was a man named Tiny who was there for murdering two people, and I had an astronomy assignment due in a couple of days.

I asked myself, “what is the exact sequence of events that led to this situation?”

On top of that, I was a virgin when I was first dating that person. We had a summer off and got back together, and I wasn’t anymore. I didn’t understand how deep that could trouble someone to feel that they were unworthy. I can’t even be mad that she then lied because I had opportunities to learn and I didn’t. Men aren’t equipped to notice and deal with situations correctly.

Those situations being the complexities of sexual interactions?

Absolutely. The solace I had in that situation was knowing that I felt something was wrong but I didn’t act on it. I felt the person wanted more from the relationship than I did. I remember talking to my mom about the fact that she was bugging me for more attention. My mom told me to be careful.