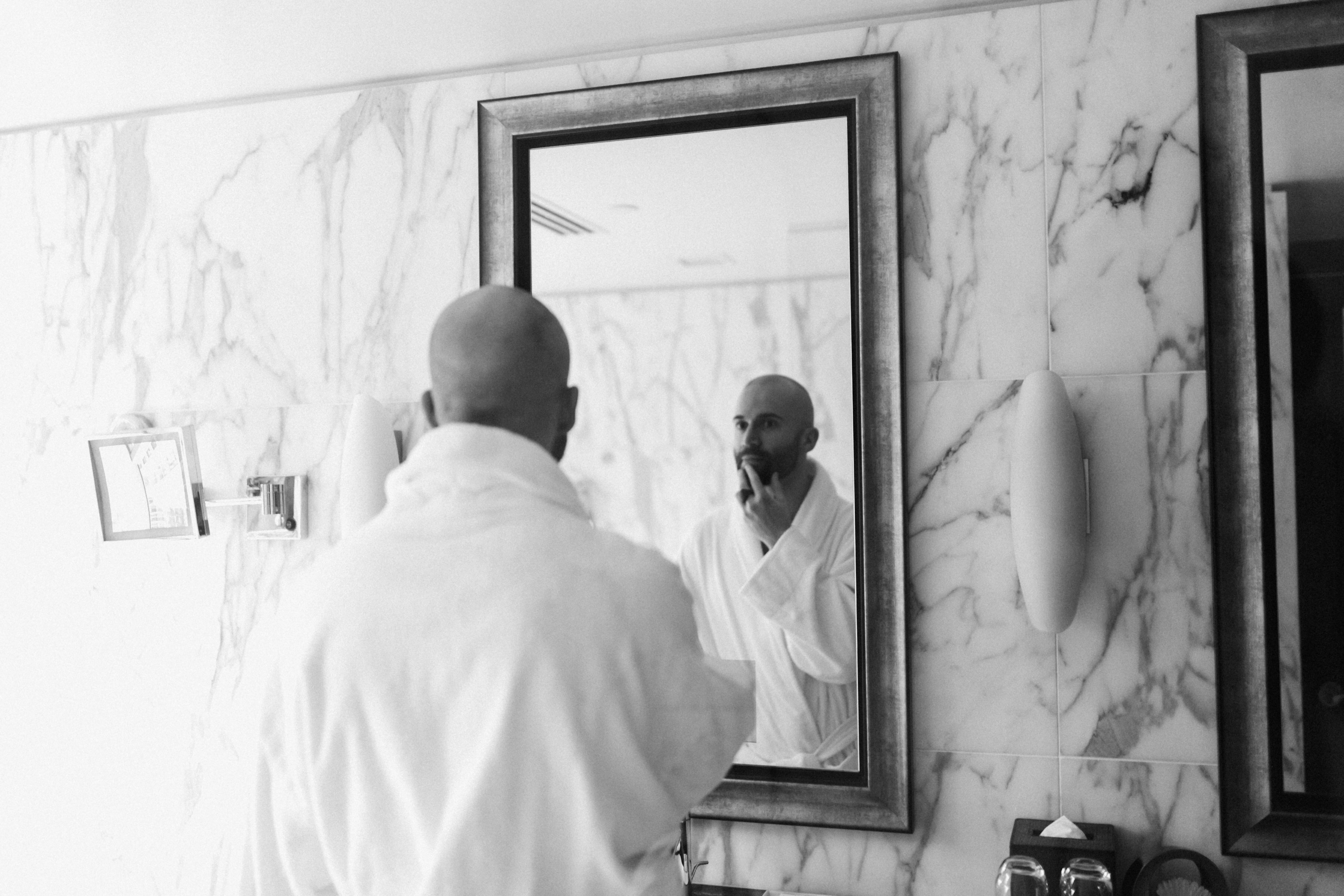 We need some heroes. We have plenty of villains.

In a “future is female” world, where do men fit?

I don’t like that saying, “the future is female.” I think the future is human. Yes, I think we need to be really proactive about efforts that support women and fight the inequalities that exist, but I think to swing the pendulum completely in that direction where women are now the dominant sex and men are then experiencing similar issues to what women are experiencing today, we end up in the exact same position, only reversed. As a rallying cry, I get it and support it in that regard. But I would say the future is human, and what I would add to that is our need to approach it from a place that isn’t men versus women. I think our work is to figure out how to show up every day as more human. Anything that we do, I think we need to find ways to celebrate the ways that we’re different. I honor and respect the fact that women can bear children, and in a way, I’m bummed that I’ll never get to know what that feels like. I will never get to know what it’s like to have a human developing inside of me and the experience of bringing that being into the world. Only women get to do that, so let’s celebrate it. And for men, open the goddamn pickle jar and don’t complain about it. I’m all for it.

My parents were separated before I was born and I was raised by my mom and my sister. I never had a male figure in my life that told me how I should be as a man. If anything, somewhat painfully, I had to figure that out on my own. I was always aware of the way my guy friends were growing up but, I never really took that on. I understand the stereotype of being strong, that you shouldn’t show emotion, cry in public, express feelings, and just “man up.” We’ve heard it all. That’s never resonated with me and it’s never been my reality. I was raised by two really strong women, and it’s funny, I’m going to send her this interview because she would be so proud, she never raised me to be a good man, she raised me to be a good person. It was never actually about you need to respect women, it was about you need to respect everyone. You are no better than anyone and you are only as good as the hard work that you’re willing to put into something.

How do you translate that into a lesson for others who might not have grown up in a household where those strong female roles were prevalent?

Oh man, it’s so interesting. This reminds me of William Chamberlain, he’s a psychotherapist [in Vancouver] and he was talking about the contributors of a strong sense of self. When does a human being start forming a sense of self and how can you mold a positive sense of self? I feel like that’s not a male or female thing. If we’re going to raise boys to be great men, we have to start by raising strong individuals. I wish that content was being taught in schools because if kids were given those tools and skills when they’re young, you don’t have nasty problems that manifest when you’re older. You know how to separate your bubble of reality from someone else’s. That is a concept that blows a lot of people’s minds the first time they hear it. Most people approach things from an ego-driven place of 'I see it this way so why don’t you see it that way too?' It’s really different how two people can experience the same situation, and you have to teach that early. It’s almost like "how to be a good human 101." You have to learn yourself and how to respect and honor everyone else’s sense of self. If you can figure that out, then when you grow into a teenager and girls start to look interesting and not riddled with germs, by the time you make that flip, you already know how to be a decent human being. 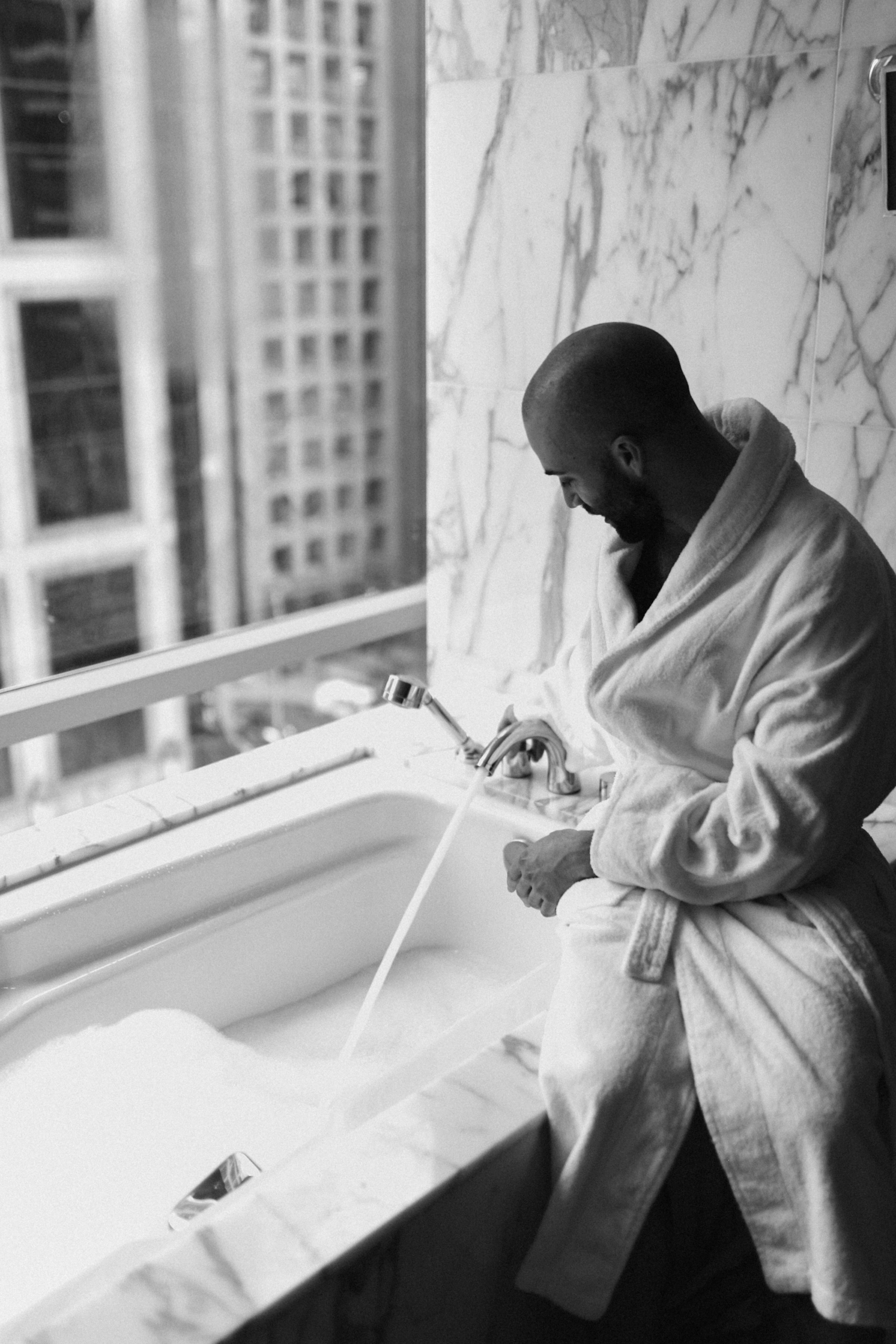 I understand the stereotype of being strong, that you shouldn’t show emotion, cry in public, express feelings, and just “man up.” We’ve heard it all.

I wanted to bring up a moment between you and me —

You’re in the bathtub and you can’t escape!

This is quite literally the hot seat.

I had made a comment about when you wear high heels, you constantly have to assess danger on the street, which is kind of like being a woman. And you responded: if this was our first date, I would have assumed by that comment that you were a feminist and hated men. I took issue with the fact that you used feminist and man-hater so close together, almost interchangeably. I think that needs to change, so what can women do to help change that perception?

Yeah, I think feminism as a term needs rebranding. Like, it needs to go to a creative agency and there needs to be a brand overhaul to rebirth what feminism, as a word, is. And I think that’s started. There are a lot of men coming out and saying that they are feminists, like Obama. You have a lot more people embodying that role in a healthy, positive way. What was the question again?

The question was, what can women do to help men feel part of the feminist movement, so the word feminist doesn’t become synonymous or a substitute for “man-hater”?

It’s funny, I was thinking about that on the way here. You’ve got to celebrate the positive role models as much as we expose the negative ones. There are plenty of idiots and shitheads out there right now that are giving us a lot of reason to be like, you fucked up. Louis C.K, Harvey Weinstein. I find it funny, you never hear about the good guys.

That’s been a theme in the conversations we’ve had with men.

We’re over here quietly being respectful, good, honorable men to all the women in our lives, and not that we want to be praised for it. I don’t need a spotlight shone on me, but like any movement, you need a role model. We need some heroes. We have plenty of villains.

I think you chatting about rebranding feminism goes hand-in-hand with the blaming of "the bad guys." It’s all about outward anger, rallying, and marching. We need to also show feminism through empathy and sharing about the amazing men in our lives. I don’t know why that’s not being shared, or maybe it is but it’s not going viral the way the negative stuff does? I'm not sure how to change that.

I think you put a bunch of men in baths and talk to them. 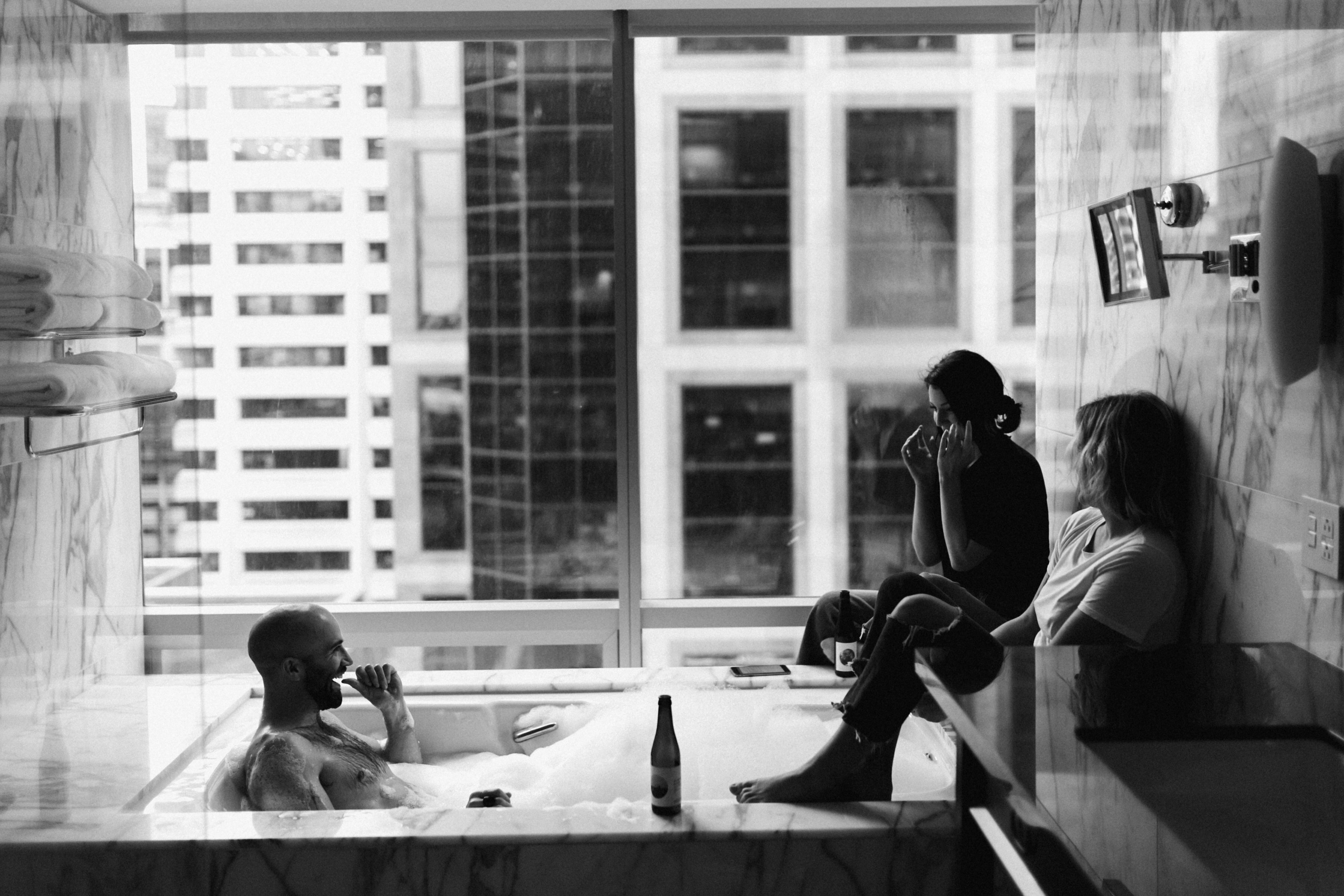 How do you speak about women to men in your life?

There are two key things. When I’m speaking about women, it’s always with love and respect. The same way I would speak about any human.

It comes back to the bubbles of reality. Rather than assuming that everyone should see the world the way that I do, it’s a case of, this man is experiencing his version of reality so let me get curious about why, and through asking questions and causing him to inquire about the opinion he’s made up in his mind, maybe I can actually shine a light on something that doesn’t quite add up, a thought that might not be authentically his. Telling him, dude don’t be a fucking douche, don’t say that again, might cause him to back-peddle in the moment but a week later he’s going to find himself in the same conversation.

And then he’s just going to talk shit about you now, and maybe even push you away?

I don’t want that because I don’t want to destroy relationships. What’s that quote? We’re spiritual beings having a human existence. We’re doing ourselves and each other a disservice if we just shut down when we hear something objectionable. What is it when we hear something objectionable? It’s the fact that we’re hearing something that challenges our version of reality. Naturally, we feel defensive around that. It’s like our sense of self is challenged because our sense of self is comprised of our interpretation of the world. We’re not helping people learn and grow if we shut down and shut them out. We’re only helping people learn and grow if we ask them questions and get curious, and maybe give them an access point to see the world in a different way. 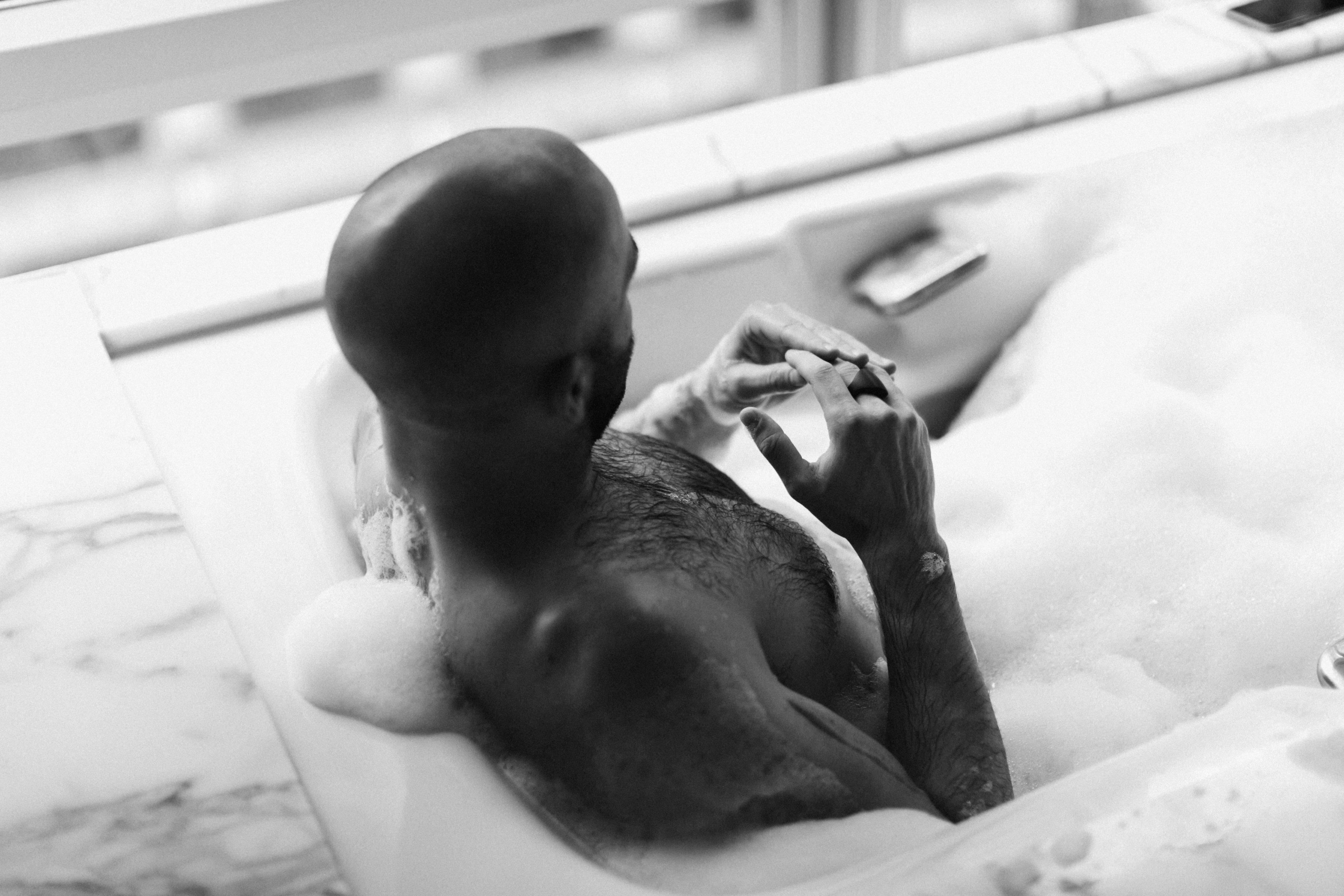 We’re not helping people learn and grow if we shut down and shut them out.

There’s an obvious reason: I needed a bath.

But seriously, I love the fact that you’re flying the flag for the conversation around feminism and seeking to include men in it. I think that’s the way it has to be. The other thing is, we need the Girls Who Say Fuck version for men. There are Man Talks, and that’s wicked. I love what Connor is doing, and men need more of that. The war that we’re waging right now against shitty men, it’s the generation above us. I’m making a bold generalization here, but there are so many millennial men that I know who are so fucking lost, and the worst thing is, we don’t talk about it. Women, at least you talk to each other. We don’t. So, first of all, we have to get over the barrier of even connecting with one another and admitting when we’re struggling with something.

Especially in this arena, if there is no compassion around the topic, you’re not going to want to talk about it either.

Connor says the same thing every time he opens a Man Talks session: you’ll notice that there are plenty of women here, thank you for being here. We need your support, we can’t do this alone.

We feel the same way.